History of Nasal Washing is an excerpt from Dr. Hana’s book, Clearing The Air One Nose at a Time. Please contact us if you would like to read more of Dr. Hana’s book!

Nasal washing or nasal irrigation is an ancient Ayurvedic technique known as Jala neti, which literally means “nasal cleansing” in Sanskrit (a classical language of South Asia). With origins based in the yoga tradition, nasal washing has been used throughout India and South East Asia. Although not commonly practiced by Western cultures, these Eastern cultures have performed Jala neti as routinely as brushing one’s teeth for centuries. 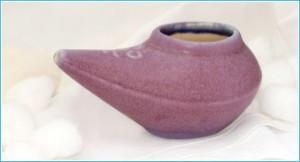 Traditionally a neti pot, an Alladin’s lamp or tea pot shaped vessel, has been used to flow salt water into one nostril, through the sinus cavities and out the other nostril. In addition to using the neti pot, ancient yogis experienced success by snorting salt water in a rhythmic fashion as part of their daily rituals.

In the West, doctors have known the benefits of nasal washing for over a century. Alfred Laskiewicz departmental Head of Pozna Otolaryngology Department (1932-1939) described conservative treatments of nasal irrigation from general hygiene to treatment of Scleraderma. The Proetz procedure has been used by ear, nose and throat surgeons for years to clean out the sinuses.

Various salt rinse combinations have been studied, including isotonic, hypertonic, with and without buffering, and even with additives such as colloidal silver, antibiotics and herbs. Scientific data has continually supported the overall effectiveness of nasal washing. Hypertonic buffered saline solution has been shown to be most effective in treatment of congestion, removal of infectious and allergenic particles, but isotonic buffered works well for overall daily washing.

Over the past decade, there has been a slow-growing explosion of interest in nasal cleansing. This has been powered by the overall surge in prevention, alternatives and an overall integrative approach to health. Well-known doctors such as Dr. Murray Grossan, Dr Andrew Wiel, and more recently, Dr. Oz have promoted the practice of nasal washing. Although antihistamines, decongestants, steroids, antibiotics are commonly prescribed, doctors have added the adjunct treatment of nasal irrigation for allergy suffers, post operative sinus surgery patients and for patients with chronic sinusitis. Only recently has proactive nasal washing been recommended as a preventative approach.

Today, there are many products created to make nasal washing quicker, easier, more effective and less messy. They all work to some degree, each with their pros and cons, but this is where Nasopure excels. It is the best designed nasal washing system offered the modern alternative to a neti pot.

You were not leaving your cart just like that, right?

Enter your details below to save your shopping cart for later. And, who knows, maybe we will even send you a sweet discount code :)